The number of passengers in public transport is constantly growing; the Verband Deutscher Verkehrsunternehmen (Association of German Transport Companies; abbr. VDV) announced another increase of 1.4 percent for 2017 compared to the previous year. [1] This positive development worsens, at the same time, the fundamental issue in public transport: the management of high fluctuations in demand. Particularly during peak hours, many transport companies are operating at their capacity limits, whereas many vehicles are usually poorly utilised during off-peak hours (i.e. night-time or vacation periods).

This means in some cases that the TOC’s average overall utilisation rate is very low – despite lacking capacities during peak times. Not only does this have cost implications, it also means higher emissions per passenger kilometre.

To tackle this issue, BSL Transportation has developed the approach of “Smart Capacity Management” which aims to meet environmental requirements as well as economic necessities. This article gives an overview on the methodology of smart capacity management and our findings from various projects regarding this topic.

The process of smart capacity management can be divided in three phases:

During the analysis phase we concentrated on a differentiated analysis of the utilisation rates. For this, we examined each mode of transport and their utilisation data which we differentiated according to day type, time of day as well as spatial and seasonal aspects. The analysis’ results were summarised in a standard report which shows individual need for action (at first as average for all lines of the TOC). Those can then be aggregated in a systematic utilisation profile:

Apart from the data-related analysis, an essential part of smart capacity management is the qualitative cause analysis of significant needs for actions and (non-) utilisation drivers. This step can only be carried out when working closely together with the TOC’s own experts on-site.

The role of external stipulations regarding capacity planning in public transport

In our experience, reasons for low utilisation rates are often found in external stipulations which must be fulfilled by the transport operating company. Often standards exist which are going beyond any public service obligations and which make an economical and environmental management of transport utilisation difficult. Stipulations in public transport are, for example, connections of less urban structures with urban quality standards (like providing articulated busses instead of rigid busses) or through services of individual bus lines despite entirely different traffic requirements for some line segments.

Elaborating those restrictions is an important part of the smart capacity management process. It also comprises communicating the results to external stakeholders and increasing awareness of decision-makers in politics and public administration regarding utilisation issues. This is particularly important for the derivation of measures, as the transport company are often not in the position to decide and operate independently.

In order to solve the utilisation problem, there are still several approaches for the utilisation management which may be taken cross-functionally. As a result from numerous projects for transport companies, we have developed a catalogue of measures which serves as starting point for deriving measures: 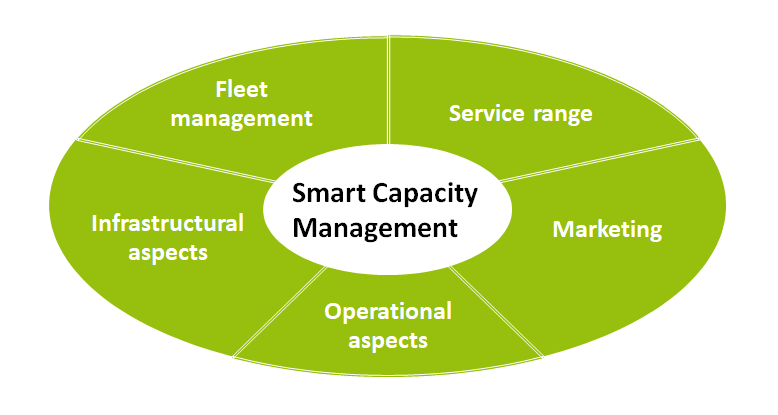 Possible measures regarding the service range include e.g. shortening or cutting of service lines, changes in operating hours. Marketing measures can consist of peak or off-peak ticket pricing. On the operational side, the transport operating company may consider subcontractors during peak hours or during super off-peak hours. Infrastructural measure include e.g. additional turning points or additional capacities during peak hours (by adding units). Measures in fleet management enclose e.g. switching vehicles between peak and off-peak hours.

There are plenty of other possibilities which must be checked and adjusted according to the regional requirements of each transport company. However, all individual measures require a holistic and coordinated approach, as utilisation effects only arise from numerous individual factors through a coordinated treatment and can be easily lost again if not viewed as a whole. Our module kit, therefore, is showing various individual measures as well as connected sets of measures which have proven to work (good practices). Hence, the purpose of our module kit is far more than a mere “idea provider”. It can serve as foundation for the development of a sustainable, long-term oriented strategy in public transport.

In addition, the smart capacity approach serves also to increase the awareness of political decision-makers regarding existing utilisation issues in public transport and to extend the discussion beyond peak hours. Particularly during a TOC’s vehicle procurement process, the impact of possible purchases on utilisation rates during super off-peak hours must also be considered – in addition to the requirements during peak hours. As mentioned above, such a consideration is necessary not only from a economic, but also from a ecological point of view, as larger vehicles also cause higher emissions. The implementation of a smart capacity management serves as support and orientation.

The ERC-Gruppe is getting a new addition: Moin and Welcome molytix!

In 2017 mobilité and BSL have decided, to concentrate their particular competencies in the ERC-Group. The goal was to corporately offer integrated strategies, innovative concepts and present a consulting portfolio…